The God in the Bowl

"The God in the Bowl" is a short story by Robert E. Howard, first published in Space Science Fiction September 1952, in a version edited by L. Sprague de Camp. Howard's original version was first published in The Tower of the Elephant (Donald M. Grant 1975).

Conan plies his trade as a thief in the city of Numalia in the kingdom of Nemedia. He is caught while attempting to steal a valuable object from a museum and becomes the suspect in the death of the museum's owner.

Arus, a watchman in a museum colloquially called Kallian Publico's Temple, examines the recently killed body of his employer, Publico himself, apparently strangled. His clothing was torn in the struggle but his valuable jewels and rings are untouched. Arus looks up to see an armed Conan striding towards him, and quickly triggers the alarm. He attemps to take Conan into custody, assuming he killed Publico. More guards, accompanied by Inquisitor Demetrio, burst into the room, and Arus explains that he noticed that the door to the treasure room was bolted from the inside, but not locked correctly, and when he came in to investigate, he found the body and Conan. Demetrio begins to question Conan, but his companion Dionus tries to bully answers from Conan. When the barbarian stands up to the burly guard, everyone is a bit taken aback by his courage. Demetrio continues to question Conan calmly, and Conan admits he had come to steal and explains how he waited until Arus had passed earlier, then scaled the walls of the warehouse and broke through a trap door on an upper floor. When he came down a set of stairs and through a hanging he saw Arus standing over the body. The clever Inquistor deduces that Conan was, in fact, hired to steal something specific and given instructions on how to enter the museum, but Conan becomes reluctant to offer more information. Demetrio admits he is doubtful Conan would strangle Publico if he wanted to kill him, and he inspects the body, determining that the method of strangulation was a large cord of some sort. He follows a train of carnage to another room where the attack probably began. Suddenly, the group hears a chariot pull to a stop outside and Demetrio orders the chariot driver and Promero, Publico's clerk, brought to him. The charioteer, Enaro, states that he dropped Publico off at Promero's house and was given instructions to come to the museum after midnight. Promero confirms that account, but when he balks at revealing what Publico and he discussed that night, Dionus threatens to let loose one of the soldiers, Posthumo, whose violent reputation is well known, on the frightened clerk. Promero finally tells the full story - that Publico was interested in examining a sarcophagus with a copper bowl attached he was storing for a priest of Ibis, one Caranthes of Hanumar. Publico became obsessed with the object, imagining it contained a jeweled diadem of ancient Stygian monster-kings. He intended to steal whatever was inside the sarcophagus and keep it for himself. Promero, however, was suspicious as to why a Stygian would send a gift to a priest of Ibis, but Publico would not heed his warnings. When the party goes to investigate the object, which was placed in the room where Publico was attacked, they see the bowl has been chiseled off and the sarcophagus empty. Carved into the lid is the symbol of Set. Suspicion again falls on Conan, as all the exits are sealed from the inside and no one else is in the museum, and he admits that he was given a map of the temple and a mission to steal a Zamorian diamond goblet. A soldier claims he saw a rope, possibly the murder weapon, against a pillar, but when the others go to look at it, it's gone. Meanwhile, Promero examines the bowl closer and finds the mark of the Stygian sorceror Thoth-Amon, foe to Caranthes, and he believes Thoth-Amon sent something to kill Caranthes, and that something is now loose in the museum. Suddenly, Conan sees something moving in another room. Posthumo throws a terrified Promero into the room to investigate as another guard comes forth with another man who was found lurking outside the museum. It's Aztrias Petanius, nephew to the governor. When Petranius surveys the scene and agrees that Conan must be the culprit, an enraged Conan claims that Petranius was the one who hired him in the first place and gave him a map of the temple in order to steal the goblet. Demetrio offers to cover up the whole mess if what Conan says is true, but Petranius claims not to know the barbarian. In return, Conan swiftly draws his sword and cuts off the noble's head. The soldiers immediately attack Conan, and he holds his own until a scream pierces the corridor, and Promero stumbles out of the room he was thrown in and falls over dead. The soldiers flee in horror leaving Conan behind. He cautiously approaches the room, and sees a swaying face above a curtain. The perfect face whispers to Conan in an ancient language, and Conan lunges, swinging wildly with his sword and slicing off the head. The body of the creature falls through the curtain, and Conan, when he sees the serpentine body crumpled on the floor, turns and madly runs to freedom. 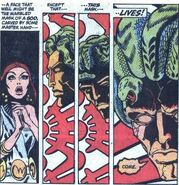