Conan the Liberator is a novel written by L. Sprague de Camp and Lin Carter, featuring Conan of Cimmeria, and first published by Bantam in 1979.

Conan leads an army against the mad King Numedides of Aquilonia. 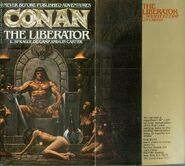 Retrieved from "https://conan.fandom.com/wiki/Conan_the_Liberator?oldid=17328"
Community content is available under CC-BY-SA unless otherwise noted.