This is article about the movie, you may be looking about the novelization

Conan the Destroyer, directed by action/fantasy veteran Richard Fleischer as a sequel to Conan the Barbarian, was released worldwide in 1984. It starred Arnold Schwarzenegger as Conan and Grace Jones as Zula. The critical and commercial response was weaker than that for the first film as it was felt by some viewers to have jettisoned the bloody, brooding ambiance of the original John Milius film, instead opting for a more child friendly adventure.

At the beginning, a group of troops led by Queen Taramis surrounds Conan and his comedian partner, Malak. Her force attacks and tries to capture them, but Conan fights back with incredible strength and agility, dispatching several of her troops. When she realizes the impossibility of capturing him, she orders her giant bodyguard Bombaata to signal a truce.

Queen Taramis then asks Conan to perform a task for her, which he declines. To force him, she then uses her magic to show Conan his destiny “praying for his lost love Valeria” and promises to keep his love alive if Conan will accomplish the task for her. Conan is left with no choice but to join her and the group returns to Shadizar.

After some brief conversation in her palace she sets Conan two tasks: capture a key gem which can only be touched by her niece Princess Jehnna and get the magic horn from a wizard to awaken the dreaming god Dagoth. In addition, she secretly orders Bombaata and a group of elite guards to kill Conan after he retrieves the key. Conan, Malak, Jehnna and Bombaata set out on their quest.

They soon find two more partners to help them in their journey. First they meet the magician Akiro, who is about to be chargrilled by cannibals. Conan saves him with some judicious head chopping, and he joins the group. Later, when the group reaches a village, they find the peasants torturing an accused thief, a female warrior named Zula. Jehnna orders Conan to help her, so Conan cuts Zula loose, who begins fighting back. After the villagers are pummelled for a bit, they allow her to escape on horseback, screaming like a banshee. She catches up to Conan's party but Bombaata tries to send her away. She takes umbrage at this and the two scuffle for a bit before Conan pulls them apart. Conan then magnanimously allows her to ride with them over the mountains to the castle of Thoth-amon.

From within the castle, the magician Thoth-Amon has been watching their journey to his castle using the magic gem. As the group comes near, the castle is mysteriously surrounded by a lake. Although Jehnna wants to continue, Conan decides to rest for the night. Thoth-Amon knows Jehnna alone can touch the gem, so, under cover of night, he turns himself into a mighty phoenix and snatches Jehnna, taking her to the castle.

The next morning, Akiro is the first to awaken and notice her absence. The group searches for her, but are only able to locate her with help from Akiro's magic. He then uses his magic to find a way into the castle. As they enter through some mysterious stairs, Thoth-Amon goes into a secret room and arranges a welcome for his visitors.

When Conan enters a hall of mirrors, the door immediately closes, separating him from the rest of the group. While they're forced to watch, Conan fights a monster of the mirrors. Conan is badly outmatched by the monster, but is able to hurt the monster by destroying the mirrors. When Conan finally succeeds in doing so, the “the shadow of the mirrors” is defeated.

Thoth-Amon, now desperate, tries to pick up the Gem but is destroyed when he touches it. The magic broken, the rest of the group enters the hall and rejoins Conan. Together, they find Jhenna and capture the magic gem with her help. As soon as she picks it up, the castle starts to disintegrate and collapses completely shortly after they escape in a boat.

On the way back to find the horn, the Queen's elite guards attack and try to take Jehnna, but the group, excluding Bombaata, fights back and stops them from escaping. Conan defeats the guard leader in an impressive sword fight. Bombaata then attacks Conan in order to follow the queen’s order but Jehnna stops him. When Conan recognizes the attackers as Queen Taramis elite guards, he questions Bombaata about the attack, but gets no good answer.

After some rest and some of the funnier scenes in the movie, they reach the place of the horn: a mysterious fortress that looks like a temple of doom. Jehnna leads them through the main entrance down to the crypt.

When they reach the horn, Akiro reads instructions carved on the wall. He finds out who will be able to touch the horn, how to awaken Dagoth and what's going to happen to the world in the future. He tries to inform Conan, but Conan refuses to listen. Jehnna places the gem in the appropriate slot, opening the big cave o' fire. Jehnna grabs the horn of magical power. 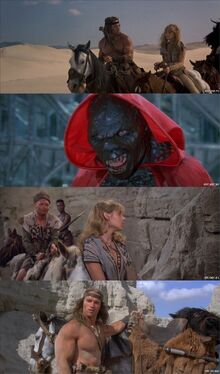 They try to leave, but are waylaid by the keepers of the horn, who want it back. After a conversation between Akiro and the leader, a brutal fight ensues and the group retreats to the crypt. There, Akiro defeats the leader in a magic fight, while Bombaata and Jehnna find a tunnel and escape. Bombaata, seeing the others following, decides to enact the Queen's order and betrays them, starting a landslide that buries Conan, Malak, Zula and Akiro. They survive, and are quite angry.

Bombaata escorts Jehnna back to the Palace. Queen Taramis immediately takes the horn and orders a ceremony for Jehnna’s birthday and Dagoth’s awakening-day. As the ceremony starts, Jehnna plugs the horn into Dagoth's forehead. The Grand Vizier instructs Taramis to sacrifice Jehnna when Dagoth shows the first sign of life. Conan and the remaining members of the group find a secret entrance to the Palace. Conan and Bombaata meet, and finally face each other one on one

The fight is tough, but Bombaata is defeated in the end. During the fight, Conan orders Zula to rescue Jehnna from the sacrifice. Zula does so, killing the Grand Vizier in the process. Seeing this, Queen Taramis screams “she must be sacrificed” and tries to sacrifice Jehnna herself. Time has run out, however, and Dagoth awakens without any sacrifice. As a result, he turns into a monster and looks like a creature of Hell. Conan rescues Jehnna from Taramis and pushes the evil queen towards the evil creature. Dagoth slaughters her fiercely with his horn, showing no sign of respect. Everyone tries to stop this monster. A lightening storm begins and the palace pillars start to collapse, causing more chaos. The situation becomes ever worse for the survivors.

Conan tries to fight the monster but is unable to. He looks like a child stopping a giant. Akiro, however, finally finds the answer. He tells Conan to pull the horn off Dagoth's forehead, which is the only way to kill him. Tearing the horn off the living monster seems an impossible task, but Conan manages to jump behind the creature and grab hold of the horn. After some hard work, he pulls it away. Dagoth weakens and dies.

Jehnna becomes the new Queen of Shadizar and makes Zula, Akiro, and Malak ministers. She also offers to marry Conan, but Conan leaves her palace after a last kiss to search for his own kingdom.

Add a photo to this gallery 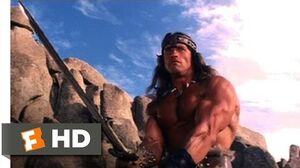 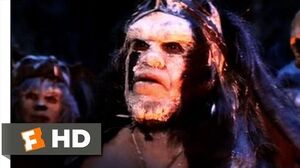 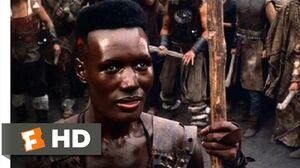 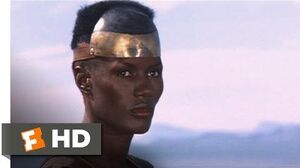 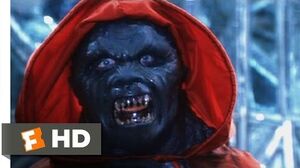 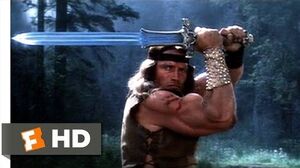 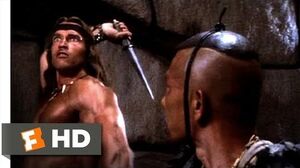 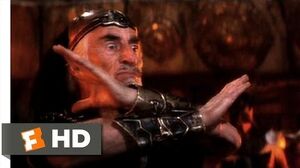 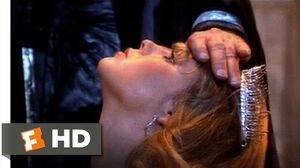 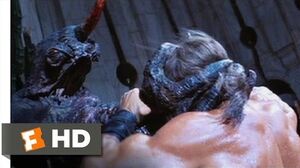 Retrieved from "https://conan.fandom.com/wiki/Conan_the_Destroyer?oldid=18628"
Community content is available under CC-BY-SA unless otherwise noted.