Conan the Buccaneer is a 1971 Conan novel by L. Sprague de Camp and Lin Carter first published by Lancer.

Conan, now in his late thirties and captain of the Wastrel, becomes embroiled in the politics of the kingdom of Zingara when he seeks the rumored treasure on the Nameless Isle. The fugitive Princess Chabela, the privateer Zarono, and the Stygian sorcerer are among those mixed up in the treasure quest.

* dies in this story 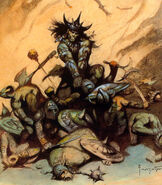 Frank Frazetta, Rough Cover, 1971
Add a photo to this gallery

Retrieved from "https://conan.fandom.com/wiki/Conan_the_Buccaneer?oldid=14085"
Community content is available under CC-BY-SA unless otherwise noted.